The history of the Strykersville, N.Y. Shur-Gain mill mirrors the story of dairy farming in Western New York.  In 1956 Harold Schiltz traveled with his "feed mill on wheels" to grind corn and oats for dairy farms and sold basic supplements.  In the 1960's as dairy herds grew and farmers began to load their farm-grown grain on trucks, they needed storage. Mr. Schiltz parked his feed mill and offered storage and grinding at the Strykersville location. Over time he bought used equipment from various places to expand the services of his feed mill. 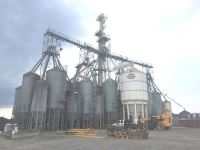 In 1974 John Schiltz and his brother, Pete, took over the reins of the business after the death of their father. From the late 1970's to 1990's the business saw significant growth, reflecting the dairy industry's prosperity. In 1987 John bought his first load of feed from Shur-Gain. In 1999 after a 12-year partnership with Shur-Gain, John and Carol Schiltz sold their business to Shur-Gain. Shur-Gain has continued on the successful growth path paved by the Schiltz family. In 2003 the company built a state-of-the-art mill, replacing the old facility. Today Shur-Gain employs 61 people, located at Strykersville and Pierrepont Manor. To deliver the 75 to 100 daily feed orders, a fleet of 23 Shur-Gain trucks travel to all points of Upstate New York.

Nutreco USA, Inc. has plans to construct a 2,500 square foot addition to its existing facility to house the needed equipment to erect 2 grain bins, make improvements to the loading pit, and install a pellet mill. Expected total cost of the project will be $4.4 million. The business currently has 61 employees in the county and expects to create 4 additional fulltime jobs over the next 3 years. The Company requests abatement of sales tax on construction materials and non-production equipment, and a PILOT agreement for temporary abatement of property tax.  Approximate value of these incentives is expected to be more than $100,000; therefore a public hearing was held on August 3, 2017. A copy of the minutes form that Public hearing is attached.